Today for Blogging 101, I must write a post based on a blogging prompt – I’ve picked In Due Time from WordPress’ Daily Post :

“What’s your next, most pressing deadline? Are you excited, stressed, or ambivalent about it? What’s the first thing you’d like to do once you’re done with it?”

I find myself flip flopping about deadlines, actually. I used to adore having a time limit, and found it could really get my thinksponge coming up with all sorts of ideas. These days, I don’t set myself as many, and the ones I have had recently have been fairly flexible.

My next deadline, is my younger sister’s birthday on March 10th. I’m not excited or stressed or even ambivalent about it, really! But I love to make things for others, especially requests, and the more unusual the better!
She asked me to stitch a couple of things for her and even offered to pay me my commission rate, but she is a good lass and has bailed me out of a few situations, so I thought I would make them for her birthday instead. I have the smaller piece finished and waiting to be framed, just the big piece to do now.
They are composite images made of sprites from a game called Fleshchild, which is a fan game based on another game called Yume Nikki.

Here’s the finished stitch of the character portrait of Visi, in her Doll form (it makes more sense when you know what the game is about!): 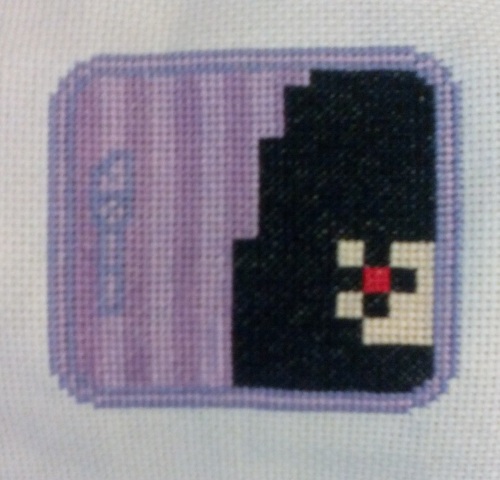 Haha, it says “doll” and I call my sis “Dolly.”
I had to modify the sprite a bit, as the original had a plain background with a sort of snowy effect around the edges, but she wanted it to be more like the Vice character picture, with stripes. Easily done in Photoshop, then imported into PCStitch. I didn’t keep track of how long it took to stitch, but it’s fairly small so it wasn’t long – a few hours at most!

The big project is a lot larger in dimensions, but isn’t very complicated. It’s basically three red sprites on a black background, with a red border. I hope I have enough red!

“The first thing I’d like to do once I’m done with it?” Give them to their new owner and get the next project lined up!

Me and My Blog

As I’m trying to kick start my blog again, I joined the WordPress Blogging 101 course. This post is my first assignment – a “who I am and why I’m here” kind of thing.
Since most of my readers and followers are already familiar with me and what I do, I figured this would be a good time to look back at what I’ve done and how far I’ve come with it.

I started this blog as a way to keep track of my cross stitch projects (and other things I make), rather than doing it in a physical format. Publishing posts online also enabled me to share things with the world at large, which is something that has given me confidence in my stitching endeavours. I have been fortunate enough to be able to inspire not only other stitchers but also people new to the craft.
Since this blog began way back in 2009, I’ve shared many work-in-progress pictures and photos of completed projects. I’ve redesigned the look of the pages several times (and I’m about to do it again.) I’ve gone through a lot in my personal life as well, and sometimes that’s reflected in my posting.

Part of the reason I signed up for Blogging 101 is that I’ve neglected my little place for so long now, and I really want to rediscover the love of posting and sharing that I had before.
So, if I’m successful with this course, I hope to be blogging more often this year – and that also means that I have to be stitching! (I already have some great projects in the works, so I could be off to a good start!)

I don’t know what else the course will involve, but I’m expecting a few more post-based assignments. Hopefully, it will all be good and I’ll be a proper blogger once again!

See you all soon!

Another bunch of new stuff!

Wow, it has been a while, hasn’t it? My poor blog has been neglected due to Life and its many distractions. One of those being stitching, naturally. Stitching really helps me when things are tough (and things have been really  tough lately.)
So, I have a bunch of new things to share! (Some of these are already up on my Facebook page, so apologies if you’ve already seen some!)

I’ve been working on this piece on and off over the past couple of weeks, although I’ve taken breaks to work on other things (including the current Sprite Stitch stitch-a-long, more on that another time!) It’s a lot larger than it appears, since every “pixel” is a block of four stitches. I’m *this* close to it being done, though!

Next, four projects that were completed a while ago.

Here we have a Link to the Past stitch (it’s a cut-down version of an after-boss scene); a Samus suit diagram from Super Metroid; a fiery Rapidash sprite and a cute Purrloin.

Finally, a cute Mario Kart image, done as a favour for a friend. 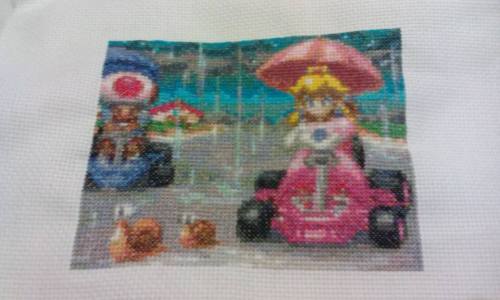 I actually have about four other pieces in progress at the minute but will post about them when I’m done with Kirby. Hopefully Life won’t interrupt me again!

Remember that Adam I had a WIP of in my last post (which was quite a while ago, I know) ? Well I went and finished it, as well as the two other characters, Axel and Blaze! 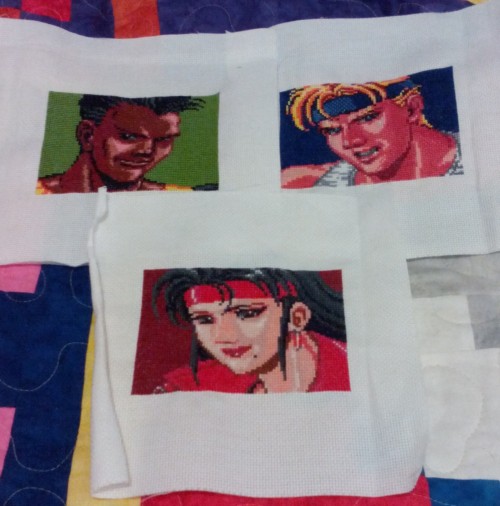 They’re not exactly finished, because they need a wash and a press before I figure out what to do with them. I may get one of those multi-photo frames for them, since it would be a shame to split them up!

I also completed this recently:

It’s Seraphim (or sometimes Sraphim) from Final Fantasy VI. I had a lot of difficulty getting the colours to look ok, but it turned out nice enough.

In other news: I signed up for KingCon 2015! So a huge chunk of my makes this year will be going there, and hopefully I will have a lot of wares!

Has it really been so long since I posted? I guess I got distracted…again! No matter, here I am back once more and with some stitchings too!

Here we have a Golden Axe dragon statue, Aarbon from Shadow of the Beast (the purple dude), a lovely fairy from Link to the Past, Shiva from Final Fantasy VI and a grumpy-looking Boo. They’re all on plastic and I haven’t cut them out yet, because I have been busy with my WIPs.

This will be Adam from Streets of Rage when it’s done. Right now it’s just the black. 🙂

I know it’s not a new project, but I’ve also been working on my Arena stitching: 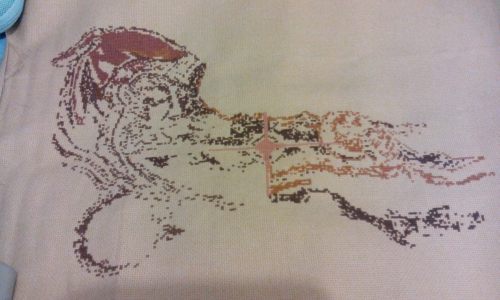 It’s really starting to look like something now, instead of just a weird brown blob!

And finally, KingCon 2015 was announced! I really want to get a table again but the price has gone up dramatically. I think it’ll probably be worth it though. Watch this space!

I know I haven’t been around for a while, health problems and other demands on my time have kept me away from my blogging, although not my stitching! Anyway, I just wanted to make a quick post to wish all my visitors a very merry Christmas and best wishes for 2015!

See you all very soon!

It has been such a long time since I started the Nei piece, I don’t even remember how long it’s been! I’ve put it aside so many times but I’m glad to say it’s finally finished! 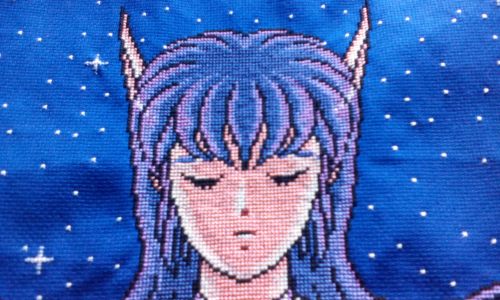 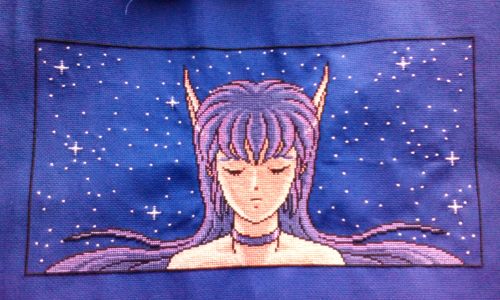 She’s just waiting for a wash and iron now, after which I’ll measure up and start looking for a suitable frame.

So…I’m back to working on my Arena piece, as well as a few smaller things (to break up all those brown shades!) Will post progress soon!

KingCon, Durham City’s first geek convention, was on October 12th. I was super nervous but it turned out to be for no reason, as I had a great time and I did quite well! The thing I worried about most was not having enough stuff, but in the end I didn’t need to worry.
Here’s my stuff, all laid out on my bed the night before the con: 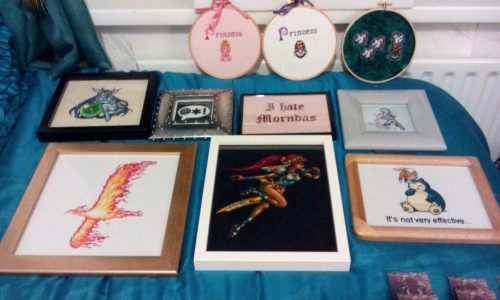 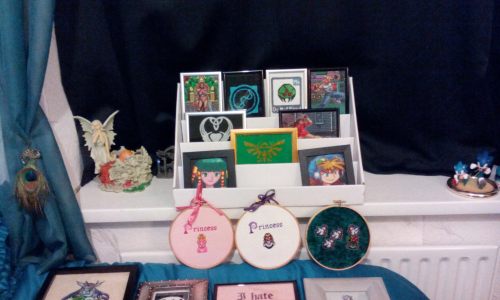 Some new stuff and a few older pieces too. Plenty of variety! Here’s my table at Durham’s Gala Theatre: 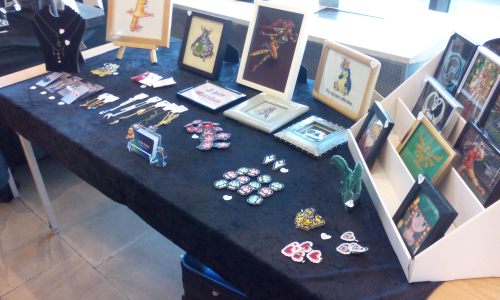 I ended up being so busy I couldn’t take any more pictures, but by the end of the day my table was looking very bare! My ever-popular mushroom magnets did well, as did the Pokeball badges. I said goodbye to the Phoenix, Snorlax/Tails and Alisia Dragoon, as well as the majority of the small stitchings. I also sold some of my handmade jewellery too!
There were two things that happened that were really awesome. First, I ran out of business cards, which I can only assume is good. Hope some custom work comes my way from that! The other thing is that when people approached my table and saw that the items were actually stitched, they would smile and say things like “that’s so cool” and “awesome”. I always worry that people won’t like what I stitch but I’m glad I made what I did as they were quite popular!

Anyway, that was KingCon, my first foray into the world of conventions. I’m really looking forward to doing another one, but first I have a load of jewellery to make for a couple of fairs I’m doing with my friend Lynn. Will be posting about my jewellery soon, as well as my finished Nei!

I didn’t get around to making my IHSW report, but I kept working on Phoenix and it’s now finished! Here it is, before washing.

I will upload better pictures of this and the other FFV sprites when they are washed, ironed and framed. It won’t be too long, because they are coming with me on Oct 12th to Durham’s first ever geek/nerd/comic convention, KingCon! I’ve been working on stuff for it for a while and hope to post about it very soon. 🙂

Never has a sprite given me so much trouble during stitching! But no matter, because it is done! 😀

I love how she turned out. The photo doesn’t even show how nice the blues are, or the pale yellow colour of the aida. The only thing that I’m not entirely happy with is the orange colour, but the more I look at it the more I like it. 🙂

Next FFV sprite will be Phoenix, which I will start as soon as I’m done with the LttP hearts I’m working on! Hopefully I’ll be able to get a lot done this weekend, as it is September’s IHSW!